PRISM: The US government is attacking the entire global online community 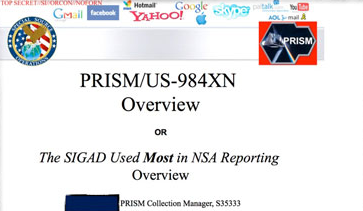 Did you need more evidence that the US government is spying on your web browsing? Well today is your lucky day. The Guardian has just published evidence of a secret program from the US government’s NSA, which proves that security agencies have direct access to the servers of major companies including Google, Facebook and Apple.

While we always suspected such a backdoor existed, the revelations are still shocking to see laid bare. The program, called PRISM, allows officials to collect your search history, the actual content of emails, file transfers and live chat sessions. This all according to 41 slide PowerPoint presentation, which the Guardian has verified as authentic.

A failure of democracy

PRISM demonstrates a complete failure in democracy and shows that citizens from every country in world are at risk from the US government’s recklessness approach to online privacy. What’s the point of debating this stuff in Congress? What’s the point of public consultations? The NSA is prepared to steam-roll the legislative process not just for American citizens, but for the entire world.  Bills like CISPA are irrelevant. The government will act like such legislation already exists. Signing it into law is a mere formality.

PRISM once again raises serious questions about the entire internet eco-system and how we perceive the companies with which we entrust so much private data. The full list of companies working within PRISM is as follows: Microsoft, Facebook, Google, AOL, Apple and Yahoo. That covers pretty much all the major providers of social networks, search tools and email services.

There’s confusion over whether these companies are complicit in the spying or have no knowledge. Google has issued a statement denying all knowledge of PRISM and Apple says its “never heard” of the program. It’s probably safe to say these companies are lying and have the protection of the US government. After all, it’s not like Google has ever been totally honest about its surveillance activities in the past.

It’s time to fight back. Boycott the companies mentioned in the Guardian’s report. Support search engines such as DuckDuckGo, which do not store user data. Get off Facebook and get onto social networks that respect privacy like Diaspora. Use The Onion Router, I2P, a VPN or a combination. Visit the Electronic Frontier Foundation’s website and get involved in campaigning for online freedoms. Let your government know that you take online privacy seriously.