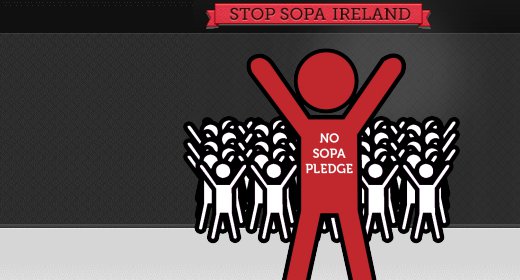 The entertainment industry may have suffered a defeat in the USA with SOPA, and a potential defeat in the wider EU with ACTA, but in Ireland it’s finally finding some success, after the Irish government passed a SOPA-esque bill into law on Friday.

The newly stamped bill, dubbed the Copyrighted and Related Rights Regulation, allows the entertainment industry to force ISPs to block any websites that it believes hosts or links to copyrighted content. ****

Although it doesn’t go quite as far as SOPA and demand that ISPs hand over user data, the new bill was nevertheless strongly opposed within Ireland, motivating over 80,000 Irish citizens to petition their members of parliament against its ratification. Protesters warned that the legislation gives the entertainment industry the legal leverage to force Irish ISPs into blocking major websites such as Facebook, YouTube and Twitter, as well as any other website that has the audacity to permit user generated links and content.

“It is a disgraceful decision,” said a spokesperson for the protest group Stop SOPA Ireland. “Not only because an unprecedented 80,419 people mobilised in the space of a few days and told Ministers Bruton and Sherlock that they were wrong to take this action. It is a shameful decision because the Government knows that those 80,419 people were right, and have done the wrong thing anyway.”

The Irish government has been under intense pressure from the entertainment industry to change its online copyright laws. Last year EMI, Warner, Universal and Sony attempted to force a local Irish ISP to block access to pirate sites, but were prevented from doing so in the Irish courts. This then led last month to EMI filing a law suit against Ireland, alleging that the government was dragging its feet in implementing copyright law reforms. Even worse, despite Ireland implementing the new legislation, it appears that EMI still intends to sue the government.

The man responsible for passing the bill, Irish minister Sean Sherlock, said that he now hopes Ireland can become a “model of best practice” when it comes to internet copyright law. “This is a very complex area of law,” said Sherlock in a statement. “My ambition to make Ireland a model of international best practice in this area will not be easily achieved, and as this debate develops I urge all interested parties on all sides to come together and work in a constructive and realistic way to the benefit of all.”

However, Sherlock seems to be somewhat confused on whether or not he wants to protect copyright, or promote innovation. In the very same statement he adds, “The challenge now is to examine what measures we can take to develop Ireland’s laws in this area in such a way as to provide the greatest possible encouragement for innovation in the creative and digital industries to take place here.”

Someone needs to tell the Irish government that you can’t promote innovation while passing laws that force service providers to police online content, as well as giving lawyers to power to cut-off a democratic nation from some of the internet’s biggest websites. What happened in Ireland on Friday demonstrates that we must be more vigilant and more vociferous than ever in our opposition to draconian copyright laws. The entertainment industry may have won the battle in The Emerald Isles, but with ACTA and PIPA currently on the ropes, the war isn’t over yet.