Internet Censorship Around the World

In 2013, Freedom House released a ‘Freedom on the Net’ report, detailing internet censorship and restrictions around the world. In the report, each country was awarded a ‘Freedom on the Net’ score out of 100. This was based on three different metrics - limits placed on online content, obstacles to internet access, and violations of user rights. Based on this score, countries were then graded as Free, Partly Free, or Not Free. Some countries - those in grey - were not included in the report. 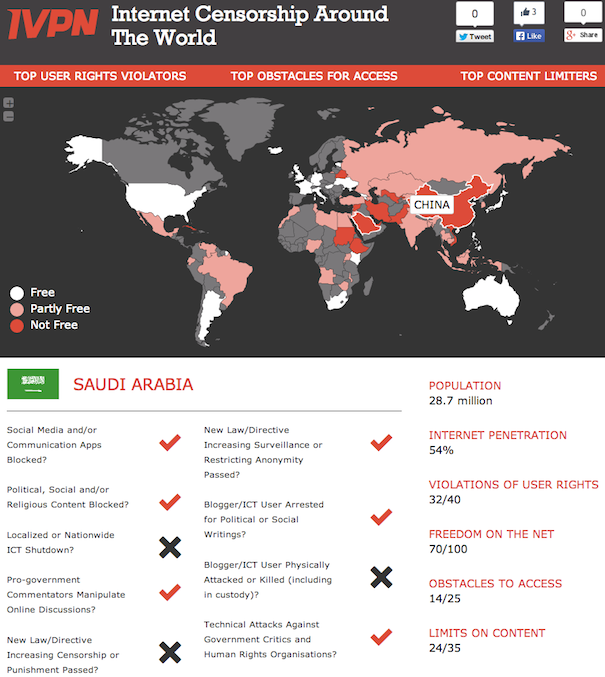 Online freedom is a hotly contested topic, and one of the biggest political issues of our time. Since its conception, the internet has revolutionised communication, and promoted free speech across the globe. However, some governments see the internet as dangerous and inflammatory. They seek to regulate the net, preventing citizens from freely communicating and collaborating.

The IVPN team have created a map of internet freedom around the world, based on the 2013 report. IVPN are avid supporters of online privacy, and believe that internet access should be unrestricted for all.

Hi! I’ve read that your company was founded by guys from some UK University. I understand that a libertarian people may live everywhere, but we know the fact that UK and USA intelligent services work together in order to spying for everyone on the planet. NSA created Google, Facebook, TOR etc, so we can’t trust company from UK even if it’s official location in Malta. In other words, how can we trust IVPN and check you are not a honeypot?

I’d like to see a response to this too