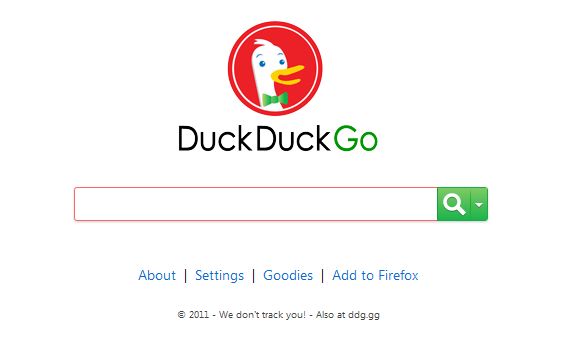 Could the growing furor over online privacy spell the end of Google’s dominance over search? Granted, it’s an almost unthinkable proposition today, but with the rapid rise of privacy-conscious alternative DuckGoGo, Google may have a real fight on its hands over the next few years.

Google’s online empire has been unshakable since 2009. The only real contender to emerge - following the terminal decline of Yahoo - has been Bing, which despite the clout of Microsoft, has captured just 4% of the global search market, as it struggles to differentiate itself.

Enter DuckDuckGo, a stripped down, partially open-sourced, search engine that has a key unique selling point, one that none of its rivals possesses: it stores zero data on its users. Yep, there are no targeted ads (indeed there are no ads whatsoever), no user accounts and no cookies. DuckDuckGo also doesn’t ‘bubble’ its users, meaning that it doesn’t individually tailor search results based on what you’ve previously searched for.

Over the last few days, coinciding with the negative press over Google’s new privacy policy, as well as increasing concerns over the amount of data being collected by online ad agencies, DuckDuckGo has seen its internet search queries more than double. Prior to Google changing its privacy policy DuckDuckGo was claiming around 400-600 thousand search queries a day. On the same day the privacy changes were announced the new search engine clocked a record 848,468 searches.

Then in the middle of February, one month after the privacy change, DuckDuckGo began to pass the one million queries a day milestone. A couple of weeks later that figure grew by 320 thousand before hitting 1,518,581 direct queries on March 28th last week. That’s more than double the amount of queries within just two months.

Granted, in the wider scheme of things, DuckDuckGo’s share of the search market is still pretty tiny – less than one per-cent. But it’s founder Gabriel Weinberg is starting to grab the attention of venture capitalist investors. Here’s what Union Square Ventures’ Brad Burnham said about its decision to back DuckDuckGo in October.

“When I first got into the venture capital business in the early 90s, it seemed to me that half of the deals I brought to the partnership were dismissed with the line “sure it’s cool but what the heck do they do if Microsoft decides to enter this business.” Today the role of the dominant player is played by Google (and increasingly Facebook). So as an investor, one has to consider how a potential portfolio company can thrive in the shadow of Google. No where is this more true than in Search.

Obviously DuckDuckGo has a long way to go before anyone considers it a rival to Google’s crown. But remember, this is the internet we’re talking about, an arena where MySpace can go from being the biggest social network and most visited site in the US in 2006, before dropping to second place behind Facebook in 2008, and then three years later being degraded to the butt of many an online joke.

Recently Google has faced backlashes on numerous fronts. The biggest one being privacy concerns, but industry analysts and bloggers have also started to wonder if Google is over-stretching itself and is taking a wrong approach toward search. Google’s biggest potential miss-step is delivering personalised search results to users (the aforementioned ‘bubbling’), meaning that you only get to see what Google thinks you want to see. Many have pointed-out the conceptual problems with such a service. Furthermore, this idea of a personalised web is closely tied-up with Google’s social network Google+, which has already been declared a failure by some.

Let’s hope DuckDuckGo’s success continues. If it does then not only will Google have to think twice about infringing on user privacy, but so will nearly every service on the web. Once users start voting with their feet (or fingers), then the rampant online personal data mining business model, used by everyone from Facebook to The New York Times, will have to start reining itself in.

DuckDuckGo is great, especially the ! command line. I hope that duckduckgo can at least give google some strong competition.